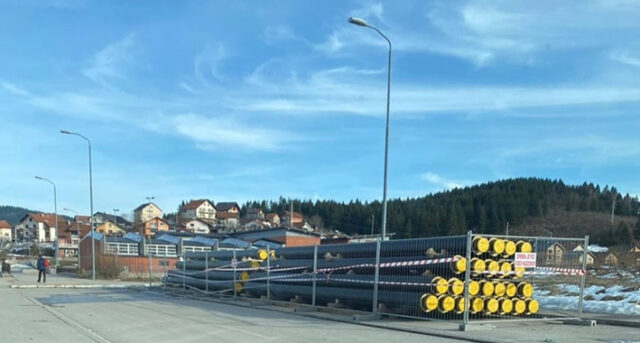 The heating plant located in the center of Pale is one of the biggest problems of this municipality. Not only in terms of aesthetics, but above all in terms of ecology. The authorities of this municipality have been promising the citizens a solution to the problem for years. Finally, when the relocation of the same began, or so it is claimed, it seems that not everything is as it seems

Namely, the municipal authorities started the construction of the heating plant without any necessary preparatory works and documentation. So, there is no conceptual or main project, no planned or anticipated funds in the budget, writes Spin.

“Reminding that there is a conceptual solution and project documentation, the mayor said that the municipal government must tackle this problem,” SRNA announced in 2019. However, the SPIN Info editorial office is in possession of a document signed on January 17, 2022, which clearly shows that the conceptual plan has not yet been made.

The director of the company “Grijanjeinvest” doo, the contractor Ljubiša Tanić, confirmed in a telephone conversation that the heating plant does not have a conceptual solution, but that there is a heating pipeline and that they are working properly on the construction of the second phase of the heating pipeline.

All this did not prevent the mayor from making the start of works official in September 2020, and so far he has spent almost two million KM from the municipal budget for the construction of the heating pipeline. The project for the construction of the heating pipeline is divided into two phases. The value of both phases exceeds the funds allocated by the municipality in the budget for these purposes.

In 2020, the Municipality of Pale allocated 580,000.00 KM for this project in the budget plan. However, based on the tender documentation, for the first phase of construction, it is necessary to allocate 683,760.68 KM without VAT. When it comes to the second phase, the Municipality of Pale has allocated 600,000.00 KM in its budget, while the tender documentation contains a figure of 940,170.94 KM, excluding VAT. We note that the figures with VAT are drastically higher, and the second phase will cost almost twice as much as the planned funds from the budget of the municipality of Pale. Later, with the budget rebalance, the first item was increased to some 800,000.00 KM, while the second remained the same.

It is not clear to the members of the Municipal Assembly of Pale how the budget money is distributed, they claim that almost the entire process is kept secret.

“About 1.9 million KM were spent without a single act, and we don’t even know how much it will cost in the end and from which funds it will be financed.” This will certainly affect the budget of the municipality of Pale, and the residents of Pale will be damaged the most”, claims Igor Tošić, the head of the Club of PDP councilors in the Municipal Assembly of Pale.

It is not clear to the members of the Municipal Assembly of Pale how the budget money is distributed, they claim that almost the entire process is kept secret.

“About 1.9 million KM were spent without a single act, and we don’t even know how much it will cost in the end and from which funds it will be financed.” This will certainly affect the budget of the municipality of Pale, and the residents of Pale will be damaged the most”, claims Igor Tošić, the head of the Club of PDP councilors in the Municipal Assembly of Pale.

There is no end to the vague and meaningless decisions of the municipal authorities regarding the relocation of the heating plant.

The location to which the hot water pipes lead is only 1 km from the old heating plant, so the question arises why the heating plant is being moved from the center to another part of the municipality where there is a school, sports center, and residential buildings.

“There is no location for planned works in the regulation plan of the Municipality of Pale. According to the regulatory plan, the mentioned location is intended for a residential and business building “, added Tošić for SPIN Info, while the director of” Grijanjeinvest “Ljubiša Tanić said that the existing location to which the pipes lead was chosen based on feasibility studies conducted by the Austrian company in 2011.

However, the entanglements regarding the location do not end here. A source known to the editorial office claims that the planned land belongs to a great friend and coalition partner of the current mayor of Pale, Boško Jugović.

“The municipality of Pale has not adopted appropriate urban plans, has not defined the location and provided the land, budget funds for the heating system are being spent, and we do not know how far it will go and whether there will be a heating plant on private land, possibly relatives of the mayor, some believe that the planned location is the property of DEMOS officials and the director of “Elektrodistribucija Pale” Aco Stanišić. And maybe the route will be completely changed, or even extended, so it will make the investment more expensive, and there are no guarantees about its completion, maybe only the invisible heating pipeline will remain from the heating plant, as well as symbolically placed dozens of cornerstones for buildings and factories in our city that have never been built “, says a source known to the editorial office for SPIN Info.

Our interlocutor adds that the curiosity of the whole story is the role of DEMOS, because the councilors of that party voted for the budget in which two phases of the heating pipeline were mentioned, whose subcontractor is the company “Stanišić”, adding that the director of the heating plant is the party’s staff.

The chosen location from the ecological aspect is also unacceptable. In addition, due to the possible construction of a highway from the direction of Mesići and a new gondola starting point towards Jahorina, whose construction is planned on the territory of the former “Famos”, this location would not be desirable in terms of tourism development either.

We also asked the mayor of Pale, Boško Jugović, how the funds were distributed, how far the works are, and other ambiguities regarding this important project, and if the answer reaches our address, we will publish it.

Without the conceptual and main project, without the planned funds in the budget, the number of users unknown, the energy source that the heating plant will use and other questions, it remains unclear whether the citizens of Pale will benefit from the budget funds invested so far or only contractors and subcontractors